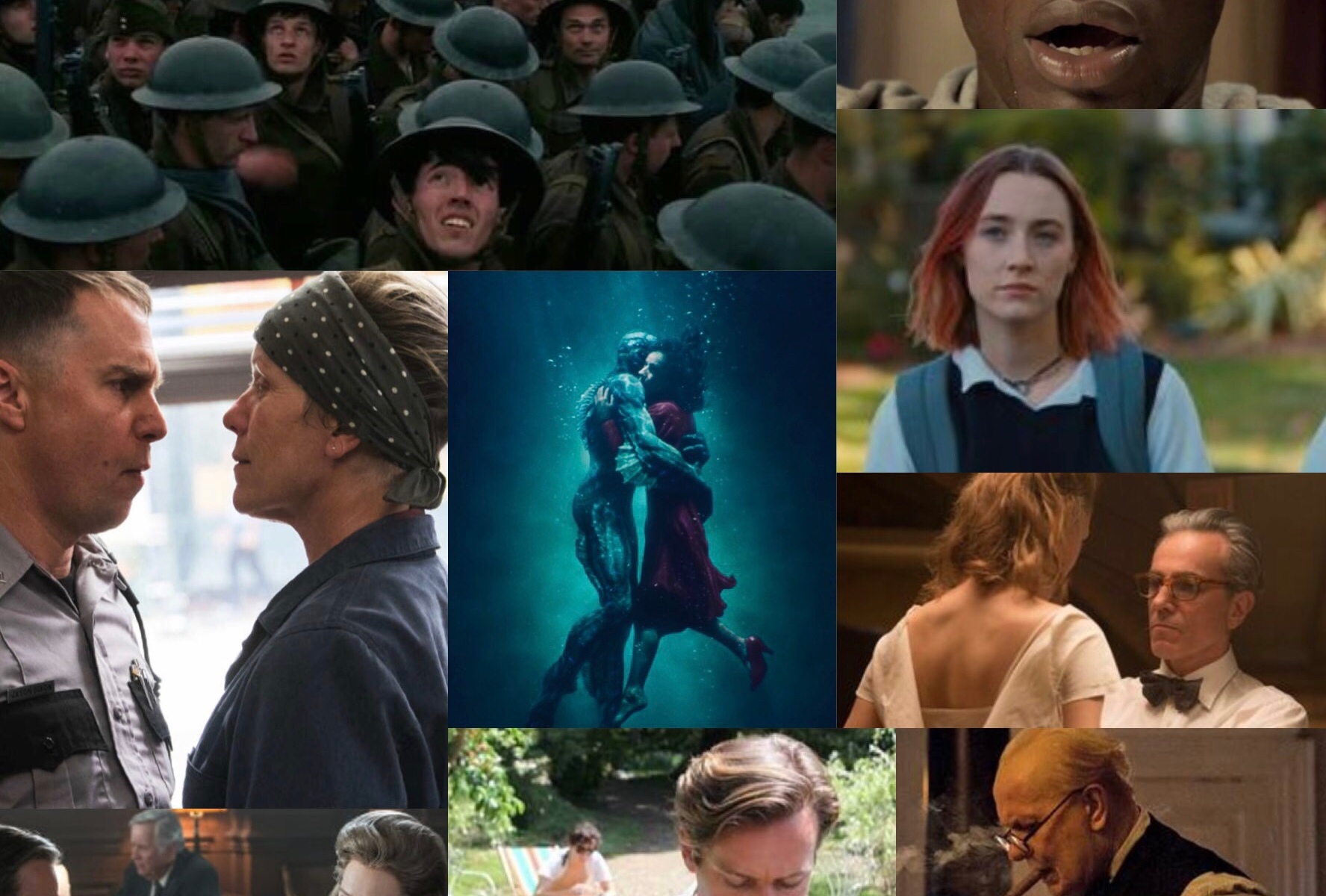 SHUT-OUTS: Michael Stuhlbarg earned zero nods despite gracing three of this year’s Best Picture nominees, namely, The Post, The Shape of Water, and most notably, his earth-shattering turn as Elio’s dad in Call Me By Your Name. Also conspicuously snubbed was Arnie Hammer, the chiseled half of that same film’s love team.
SURPRISE:  Woody Harrelson‘s turn as a dying cop did grow more pivotal in Three Billboards‘ latter half, but a third nomination might have been a stretch. Plummer earns props for seamlessly picking up where Kevin Spacey left off (some say: even suiting the role better).
CLOSE CONTENDER: Willem Dafoe was an early favorite for his refreshingly non-villainous turn as a motel manager, but buzz is muffled for Florida Project overall.
PICK: Sam Rockwell. Between the two actors carrying the Three Billboards banner, it was Rockwell who turned up the heat as a bigoted cop and swept this year’s awards season by storm.

PICK: Darkest Hour. Spritely 59-year-old Gary Oldman sought no one but Kajuhiro Tsuji to transform him into the portly septugenarian Winston Churchill. The persistence will likely pay off.

PICK: Phantom Thread. It’s almost logical to root for the only Best Picture nominee in this lot that deals with a neurotic fashion designer.

PICK: Faces Places. With the NatGeo bet Jane shockingly out of the running, the odds-on favorite seems to be this tale of an unlikely friendship

PICK: Dunkirk. This year’s sound nominees are the same set of films. While Christopher Nolan‘s mini-epic isn’t a top Best Picture favorite, it is expected to nab a technical award or two.

PICK: Baby Driver. We have Julian Slater, Tim Cavagin, and Mary Ellis to thank for making this mix tape-cum-modern B movie the high octane sound trip that it was.

SURPRISE: Lesley Manville scored her only nod this awards season for playing Daniel Day-Lewis’ uptight sister;  a shocking 11th hour inclusion at the expense of Holly Hunter (The Big Sick) and Hong Chau (Downsizing).
CLOSE CONTENDER: This is arguably the pinnacle of Laurie Metcalf‘s 40-year acting career, and it’s almost regrettable that she’s nominated in the same year as another TV stalwart who played a far more devilish mom.
PICK: Allison Janney. This is hers to lose.

SHUT-OUTS. Germany’s In the Fade was shockingly omitted despite winning the Golden Globe for the same category. Ditto for The Handmaiden which won the BAFTAs.  And Angelina Jolie‘s First They Killed My Father didn’t even make the shortlist. It’s an open race at this point.
PICK. A Fantastic Woman. The Square has its supporters, but given the anti-discrimination angle the Academy is taking this year, rewarding a film about a transgender woman seems apropos.

PICK. Coco. Loving Vincent was an revolutionary eye-popper, but Disney-Pixar will likely maintain its stranglehold in this category for at least another year.

PICK: Dunkirk. It’s a neck-and-neck battle between Dunkirk and Baby Driver. The latter won this category in the recent BAFTAs, while both films were co-Critics’ Choice winners. But to be able to deliver emotional parallels amidst a disjointed timeframe is a feat that’s hard to ignore.

CLOSE CONTENDERS: Nothing’s stopping Dunkirk from gathering consolatory technical awards, while Shape of Water never fell short of  visually arresting. And kudos to Mudbound cinematographer Rachel Morrison for scoring the first ever female nomination in this category.
PICK: Blade Runner 2049. Again, not only is Blade Runner 2049 expected to one-up its predecessor’s Oscar performance, it’s also expected to finally give Roger Deakins his due after 13 previous nods.

CLOSE CONTENDERS: Hans Zimmer enhanced the tension in Dunkirk, and while Radiohead‘s Jonny Greenwood is a longshot, it’s great to see him finally scoring a nomination for his fourth collaboration with Paul Thomas Anderson.
PICK: The Shape of Water. The technical award Shape of Water’s likeliest to win; Desplat’s whimsical pieces swept this category throughout this awards season and will likely earn him his second Oscar since The Grand Budapest Hotel (lest we forget, he also beat himself that year.)

LONG SHOT: This is the ninth nomination for Diane Warren, who deserved to win for her Lady Gaga piece two years ago. Alas, it’s an even steeper uphill climb for her Marshall composition.
CLOSE CONTENDERS: “Remember Me” was essentially what made us cry in Coco. Ditto for Sufjan Stevens‘ Call Me By Your Name love theme.
PICK: “This Is Me”. The Greatest Showman may have been a narrative non-event (come on, admit it), but its songs were indeed spectacular. In four minutes, this heart-piercing anthem encapsulated what the film struggled to convey in a hundred and six. Expect a show-stopping telecast performance as well.

LONG SHOT: This is The Big Sick‘s sole nomination; some say it deserved more. Here, it’s reduced to a near-afterthought.
CLOSE CONTENDERS:  Lady Bird is essentially Juno sans pregnancy, which makes Diablo Cody‘s win 10 years ago a good omen for Gerwig. And with Martin McDonagh inexplicably deprived of a Best Director nod, this might just be his consolation prize.
PICK: Get Out. No other Best Picture nominee galvanized us while stuffing us symbolisms more this year than this modern horror classic, and it’s mostly thanks to Jordan Peele‘s ultra-sharp script.

SURPRISES: The Disaster Artist earned its sole nomination after James Franco’s Best Actor shut-out – more on that later. Also, it’s interesting to see an X-Men movie in the mix.
PICK: Call Me By Your Name. James Ivory‘s visceral heartbreaker of a script (adapted from Andre Aciman’s novel) hit us where it hurts and therefore should earn the 89-year-old his first Oscar after previously losing for Best Director thrice.

SHUT-OUTS: Shock exclusions come dime a dozen in this major category, considering that it has fewer slots than Best Picture. Still, it’s jarring not to see Three Billboards‘ Martin McDonagh in the running. And what will it take for the legendary Steven Spielberg to be nominated again?
CLOSE CONTENDERS: Greta Gerwig’s only the fifth woman to be nominated in this category in 90 years (!) and it probably wouldn’t even have been possible if not for Natalie Portman‘s Golden Globe swipe. And kudos to the Academy for finally recognizing Christopher Nolan‘s directorial work.
PICK: Guillermo del Toro. After the recent triumphs of Alfonso Cuaron (Gravity) and Alejandro G. Inarritu (Birdman, The Revenant), Del Toro is now expected to complete a trifecta of Oscar-winning Mexican directors. Chances are, he will follow the footsteps of his amigos.