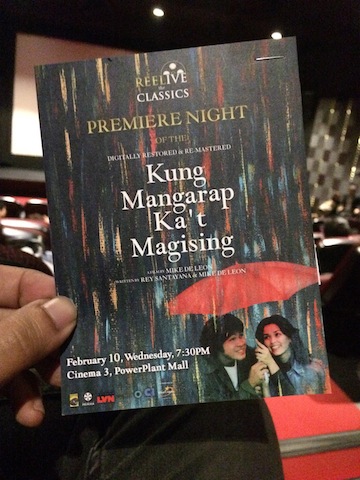 Last Wednesday (February 10), I was invited to the premiere of the digitally-restored Kung Mangarap Ka’t Magising by Mike de Leon. Originally released in 1977, this poignant and exquisitely filmed romance starred Christopher de Leon and Hilda Koronel – back when cinematic love tandems didn’t have amalgamated names. It was shot mostly in Baguio City and Sagada. (Sorry, Tadhana fans: No cliff theatrics here.)

As part of this year’s REELive the Classics line-up, the remastered KMKM boasts a revitalized color palette, clearer cinematography, and a reinstated soundtrack, among other things. Not all retouches work (the restored music was too loud, sadly), but all in all, worthy homage to masterful storytelling.

My full review now up at NOOD.PH , with additional inputs by the team.