I stepped out of the hotel room that morning to find evidence of heavy downpour. Somehow, I forgot about Baler‘s susceptibility to bad weather – with its proximity to the Pacific and all that. Good thing the sun was kind enough to show up. We only had that day to sample Aurora‘s natural wonders.

Since it was everybody’s first time in the region, we hired a tour guide to show us around. Our first stop: the majestic Ditumabo Mother Falls

Located in Barangay Ditumabo in the neighboring town of San Luis, Ditumabo Mother Falls is a 140-foot waterfall that cascades freely from the Sierra Madre mountain range. It’s considered as one of Aurora‘s top tourist destinations and its main source of hydroelectic power.

Getting there can be quite challenging. For starters, the closer you get to the embarkation point, the less accessible the roads get for bigger vehicles – hence, the proliferation of tricycle drivers in the area. Then, one must endure a 4-km trek through rough terrain to reach the actual Falls. Once you’ve paid the environmental fees, it’s the point of no return.

Thanks to the Good Friday crowd, what’s usually a 30-minute hike bloated into nearly two hours. Manoeuvring through rocks and currents was challenging enough as it is, we also had to endure long queues before squeezing through small crevices. But thanks to the breathtaking scenery, it didn’t feel like an ordeal. 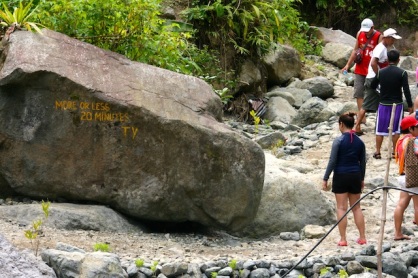 The final stretch felt like a scene from Where’s Wally? The vicinity was now more jam-packed than ever. After waiting in line for more than half an hour, we finally reached the Mother Falls.

The falls were truly a sight to behold, even if the experience was diminished the holiday crowd. Dipping in the cold waters was both rejuvenating and energizing. After surfacing, I felt like I was ready to start my day again. 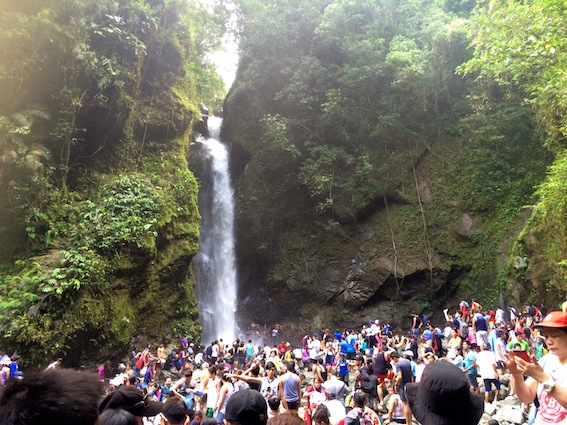 Our next stop was the Balete Eco Park in Barangay Quirino, Maria Aurora to see the  600-year-old Millennium Tree. Standing tall at 65 meters and with a diameter of 12-15 meters, this behemoth of a balete tree is the biggest in Asia and it’s unsurprisingly another selfie staple for Aurora tourists. Guests can either admire the giant from afar or pay PHP10 to enter the park, take a closer look, and in some cases even climb. 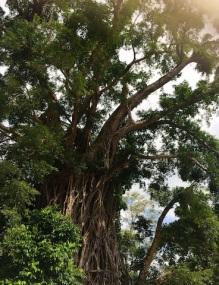 We waited for sunset beside the famous Hanging Bridge in Barangay Zabali, which connects Barangay Tibang and Barangay Sabang. We didn’t get to cross anymore since we were pressed for time (and again, the crowds). So, we wrapped up our day driving through the stretch of Sabang.

And then, more downpour.