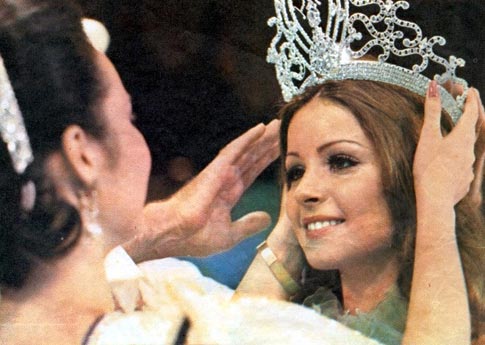 The universe has lost one of its celestial beings.

Amparo Munoz, the stunning Spanish beauty who was once crowned Miss Universe 1974, passed away Sunday night after a long battle with an unspecified terminal illness. She was only 56.

She is notable both for being Spain’s first (and so far, only) Miss Universe and for being crowned in Philippine soil. (LEFT: Amparo with Imelda Marcos)

Amparo’s reign was anything but smooth. During her run, she was hounded by controversy and ended up abdicating her title only after 6 months, thus making her the first Miss Universe to step down. She was never officially replaced, which is most probably why she is still universally recognized as that year’s titleholder.

After her tumultuous reign, Amparo would later on foray into an acting career in her homeland, making sporadic appearances in B-movies and TV shows. She would also enter a string of unsuccessful marriages before eventually sinking into obscurity during the mid-90s.

Infamy aside, she is still widely considered as one of the most beautiful titleholders in the history of the pageant.

ABOVE: Amparo‘s crowning moment in the then-newly constructed Folk Arts Theater. Note that her runner-up was Wales‘ equally-controversial Helen Morgan, who was stripped off the Miss World title later that year for being an unwed mother.