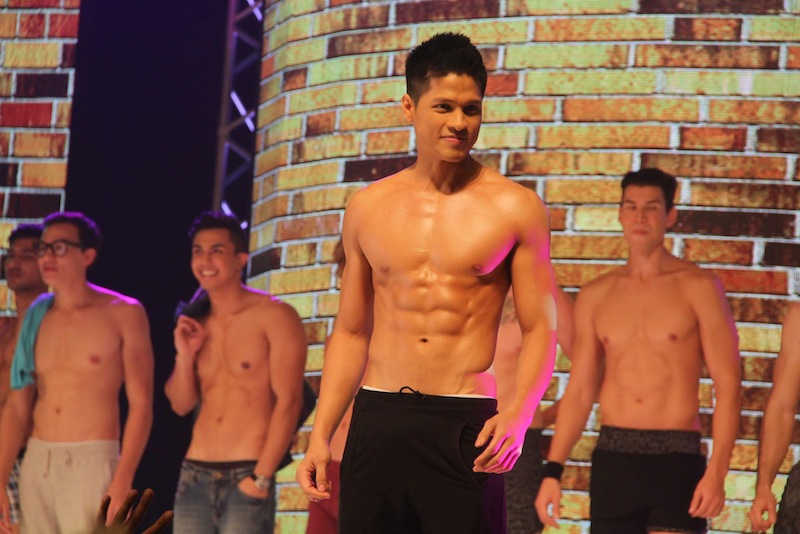 Vin Abrenica stepped into Nolita that afternoon with an amplified aura of self-fulfilment. He was with Sophie Albert, his love team partner and Artista Academy co-winner, and they just came from a meeting at our Marajo office.

I could only surmise why the 22-year-old Kapatid hunk was being extra giddy that day. Less than 24 hours before that, he made his first appearance at this year’s Cosmo Bachelor Bash, an annual event mounted by Cosmopolitan Philippines to showcase their 69 Hottest Bachelors. This year also marked Vin’s debut in the aforementioned list, and with decent exposure at that. He appears full page, right before the Top 10 Centerfolds.

Prior to our lunch, Vin spoke extensively about what transpired that night. I first asked him about his preparations. He said that he already started working out regularly before Misibis Bay, where he played the duplicitous Charlie Cadiz. It was his steamiest role to date and it required him to be shirtless in almost every scene. He had to look sexy. To prepare, he worked out almost every day with occasional visits to the sauna in between. By September, he started following a strict diet. He mentioned the usual suspects: fruits, vegetables, and lots of protein. No surprise: Rice was completely banned. Instead, he ate kamote and saba for his carbohydrate needs.

Vin religiously followed those regimens up until the day of the bash. But preparations aside, he was still a bundle of nerves when he arrived in World Trade Center. Mind you, it wasn’t just his first Cosmo gig. It was his first time to walk topless in front of a shrieking audience – obviously a distant cry from the Misibis set.

He also confessed that he initially felt dwarfed by the taller Bachelors. “I was really, really nervous. Kasi, nasa backstage ako. Nakita ko lahat sila. They were all tall [and] I felt a little bit insecure”, Vin recalled. Luckily, encouragement was a phone call away. To ease his tension, he called up his Kuya Aljur, who had not arrived yet. Vin humorously shared snippets of their conversation: “To be honest, I called him noong wala pa siya. Sabi ko ‘Kuya marami dito wala namang katawan, pero after noong make-up, nagka-8 pack abs! Kinakabahan ako!”

Then came his turn to go onstage. Halfway through the show, Vin’s nervousness started kicking in again, presumably stronger than ever, when he got a glimpse of the increasingly noisy crowd outside. As far as that evening was concerned, it was the point of no return. “The first thing that I did? Nag-pump muna ako. Pampalabas ng kaba”, Vin shared while making push-up gestures to demonstrate how he released his last minute jitters. It also helped that he immediately spotted his relatives in the audience from where he was standing: “Nakita ko uncle ko and my family, they were there. Nakita ko sila agad, tapos napasigaw.” That, along with Aljur’s encouragement, gave him that much-needed extra boost of confidence.

There wasn’t any trace of nervousness on Vin’s face when he stepped onto the ramp. Being the newcomer that he is, his entrance was muted and unannounced. But that didn’t matter. He stormed across the catwalk with an ecstatic grin, pointing out at all the people he could recognize. It was a far cry from how he described how he was backstage. Clearly, he owned that moment, in all his chiseled glory. I asked if there was any particular reason he was grouped with Ken Anderson, Gerald’s brother (READ: My indirect way of asking if the group consisted of younger brothers of celebrities). Vin simply revealed that he was assigned to the “Rebels” group. “So you were grouped according to student archetype?”, I clarified. “Yes”, he said, although he mentioned that he sometimes sees himself as a jock.

The Top 10 Centerfolds took the stage after half an hour or so. Aljur stepped out first, serenading the crowd with Robin Thicke’s Blurred Lines, replete with scantily clad back-up dancers. According to Vin, he actually attempted to sneak into the audience and take pictures of his brother, but he was barred. “I’m a fan of my kuya”, he said with subtle pride. Anyway, I did eventually get a glimpse of their sibling  dynamic later during the curtain call. “Nag-uusap kami that time”, Vin explained.

I wrapped up with a couple of run-of-the-mill showbiz questions. I first asked him if he has plans of further upholding his sexy image. He said yes, but vows never to venture into “bold star” territory. He went on to clarify that maintaining his physique is akin to how he identifies himself as a person: “To be fit, it’s a lifestyle para sa akin. Kung ano ang pamumuhay ko, ganoon ako. It’s my passion.”

Lastly, I asked if he feels he’s come a long way since Artista Academy, to which he gave a definitive yes. He expounded by enumerating all his TV5 projects thus far, from his breakthrough vehicle Never Say Goodbye to the new gag show Tropa Moko Unli. He also went mentioning his breakthrough magazine appearances from Inside Showbiz’s 50 Sexiest to Yes Magazine’s 100 Most Beautiful Stars and revealed that there’s another one in the works. “Madami pa akong targets pero unti-unti nang dumadami sila, hindi ko pa naman nafee-feel na pababa ako. Lalong tumataas”, he said about his burgeoning career.

Then we wrapped up. And there we were. At Nolita.

A pizza joint may seem like an unlikely place to see a self-described fitness aficionado. But right at that moment, Vin clearly was still in a celebratory mood. And hey, who are we to psychologically deprive anyone – even the heavily chiseled- from occasional caloric gratification?

Vin and Sophie were on queue when the former told me about his first meal after the bash. “We ate in Army Navy”, he revealed. Again, I can’t blame him. He practically spent the last couple of months as a semi-herbivore. It was his first junk food fix in months. He ordered the largest burger his appetite could handle.

I asked him to describe his first bite.

Vin replied with vivid recollection: “Like I was hearing fireworks”.