I never had the chance to try out Tim Ho Wan, the Dim Sum Specialists  when it landed on Philippine shores last year. The queues scared me. But, I’m glad I finally managed  to do so today – in its place of origin, no less!

At Marga’s coaxing, we ate breakfast at the branch located in Fuk Wing Street, Sham Shui Po before picking up with today’s proceedings. There was initial challenge in locating the establishment since the signage was written in local characters (Language barrier = 1, Us =0). When we eventually did, we found ourselves in a rather peculiar situation (for us, at least).

Upon entering, we were made to share a table with two girls – young Singaporean travellers to be more specific – who had just arrived this morning with baggages still in tow. Fortunately, they were quite friendly. Small talk ensued.

Then, in no time, we found out why this hole-in-the-wall franchise easily gained entry into the Michelin hall-of-fame: 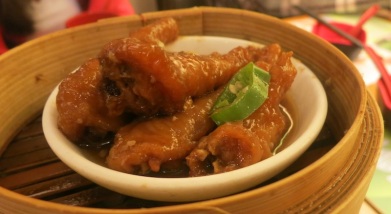 Steamed Prawn Dumpling AKA Hakaw. Ever one of my staples. 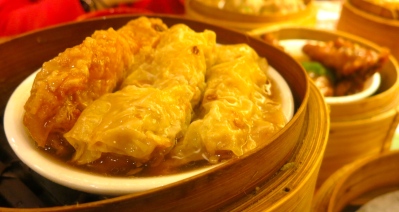 The establishment’s renowned Baked Buns with BBQ Pork. Also, one of their best-sellers.

What our seatmates had for dessert: “Tonic Medlar and Osmanthus Cake”: A curious concoction; basically, it’s like Jell-O with a flower inside.

Once we had our fill, it was time to venture up north.

Turns out, we really, really needed the sustenance.