This is my second visit in a span of six months, fourth in total. This time, I’m here to accompany my friend and fellow Southern B Marga. We are loving the weather. It’s the ideal balance between chilly and balmy that we’ve come to associate with this region during this time of year.

Just a few tidbits from the flight: I was seated beside a Filipino woman named Cora, who was travelling with her Maltese husband. She had come from her first visit to our homeland after more than 40 years and this is her first ever trip to HK. Logically, she asked me about the must-sees. I could only recommend my favorites. What was particularly interesting was when she told me about the growing Filipino population in her adoptive country of Malta, an island nation so tiny, it can fit into our archipelago. She thanked me for entertaining her and sank into a nap.

Seated at our front was a talkative little girl with the likeness of Rhyzza Mae. She became the economy area’s sole source of ambient conversation when Cora fell asleep. While her intrepidness would have been more adorable if I wasn’t so sleep-deprived, I could tell that she was quite clever. Upon landing, she asked her parents about whether they arrived in HK or in China –  a query that would have sounded far less innocuous if she voiced it out last September.

We landed in the city on time. What took us longer than expected was navigating through Yau Ma Tei, Nathan Road to find our hostel. As a result, we checked in two hours behind schedule. Late lunch was decidedly non-Chinese. We wound up at a Thai restaurant, because we were too famished to scour. But it’s all right because know we’ll be having our fair fix within the next five days, anyway. 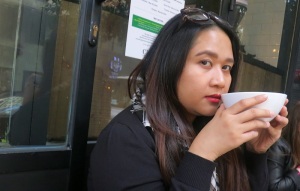 Today’s revised itinerary consisted mainly of crossing over to Hong Kong Island on a whim. We ended up in Hollywood Road, where I spent a considerable amount of time when I visited Marion last July. Marion had since relocated back to the Philippines, so that left me as the de facto tour guide (despite my own limited familiarity with the place). Luckily, the street is very easy to navigate. We did a round of preliminary window-shopping and made our way to Classified. Being the cafe person Marga is, she instantly became enamored with the place. After downing a full mug over a leisurely chat, we went to visit to Man Mo Temple, located a few steps away from the cafe. 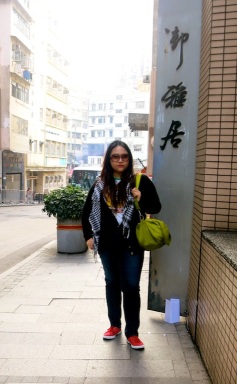 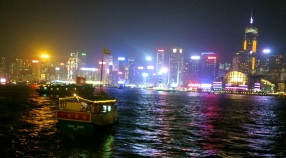 Evening fell and it was time to make our way back to Kowloon. Since we had time to spare, we managed to swing by the Avenue of Stars, which was really part of the original plan. I must admit that the Symphony of Lights, the renowned light and sound show which takes place every 8:00pm, didn’t enthral me as I had hoped. Nevertheless, having all the buildings in that entire stretch participate for this spectacle (plus, the coordination involved!) is an outstanding feat.

One thing’s for sure, though: the HK skyline, in its pure, postcard-staple form, is always a sight to behold.

May this magnificent view set the tone for this five-day adventure: