Compared to yesterday’s post-flight/hangover-fuelled frenzy, today was refreshingly chill. I woke up uncharacteristically early, with photo uploading time to spare. The hotel pool was still overtaken by partying Aussies. It’s either they typically start early or they forego sleep altogether. Then again, this is Kuta.

My transportation service arrived at 9:30am on the dot.

Today was devoted to the uplands of Central Bali – specifically, the mystical forest town of Ubud.

My driver, Dewa, was chatty without being over-intrusive. Along the way, our discourse ranged from his tourism career to the similarities between our native languages. He was intrigued by the fact that I work for a TV station back home. It was an entertaining conversation, to say the least.

With Ubud being at least two hours away, Dewa offered a couple of detours. The first of which was UC Silver and Gold, the largest wholesaler of silver and gold products in Bali, if not the entire archipelago. By the way, the acronym stands for Ubud Corner, referring to both the company’s place of origin and, well, my destination. 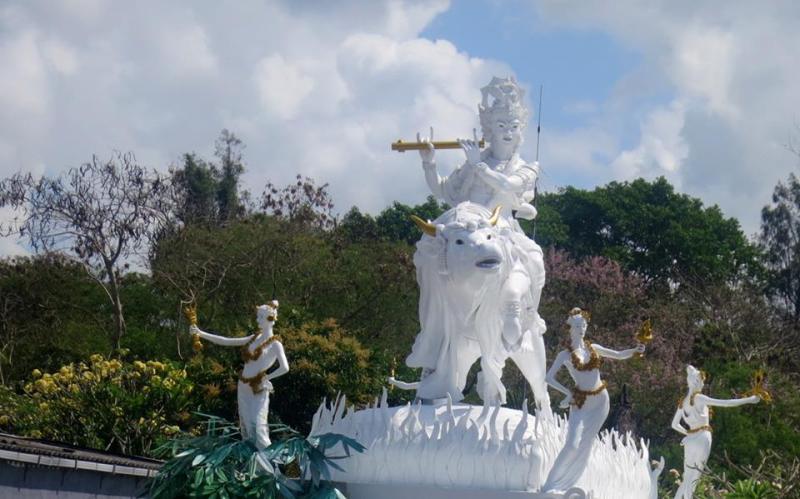 The architecture is no less than awe-inspiring, with its garish design reflecting the worldly nature of the trade. The white swirls enveloping the ostentatious structure blend with the ocean of clouds scattered all over the horizon. The golden dragonfly adornments complete the look. Visually, I was overwhelmed. 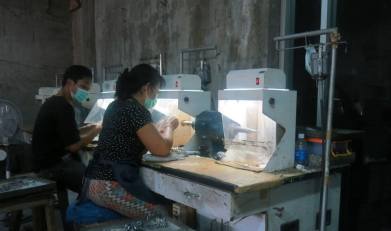 I was treated to a quick walkthrough of the production process, from the forging and carving of the raw metal, all the way to the final wash. It’s amazing how much discipline and meticulousness they put in their craft.

The showroom interior is another visual stunner and it feels like stepping into a cloud. The products are separated by floor, with silver products assigned in the first floor, and gold on the second. The stairway banister is lined with intricate, life-like statues. Mind you, Balinese sculptures aren’t just realistic, they look alive. Unfortunately, taking photos is not allowed inside.

After that, it was off to Tohpati Village, Bali’s main batik hub, where I got a glimpse of the weaving and dyeing process. There, I embarked on my early souvenir splurge.

We finally arrived in Ubud past noon. Pressed for time, I decided to postpone lunch and proceeded directly to exploring the vicinity. Dewa dropped me off at the Sacred Monkey Forest Sanctuary – the town’s Ubud’s main attraction. 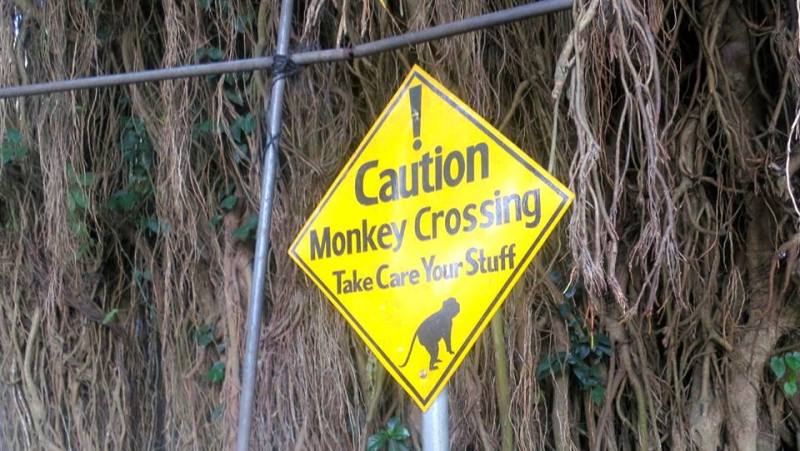 Admission to the park is Rp30,000/Php107 for adults and Rp20,000/Php71 for children. From the entrance, guests are reminded about the proper way to approach the resident primates. Monkeys tend to grab anything that they can misconstrue as food. So plastic bags and loose items are to be hidden and guarded at all costs – lest you want to be chased or worse, swarmed upon. Eye contact is to be exercised with caution and taunting is a big no-no.

Should you wish to feed them, bananas are sold per piece and per punch within the sanctuary. Never ever feed them processed human food.

There are roughly 600 crab-tailed macaques or Balinese long-tailed monkeys proliferating the sanctuary. They are surprisingly timid, though they do acknowledge human presence. So, it’s best not to force interaction since they easily get agitated. There are also temples and amphitheaters within the park. Seeing these seemingly-abandoned structures filled by simians, I’m reminded of the King Louie scene in The Jungle Book. 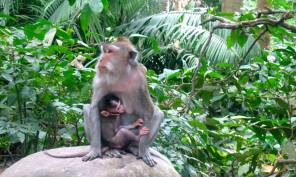 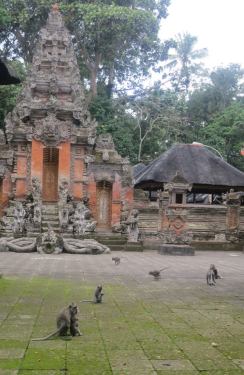 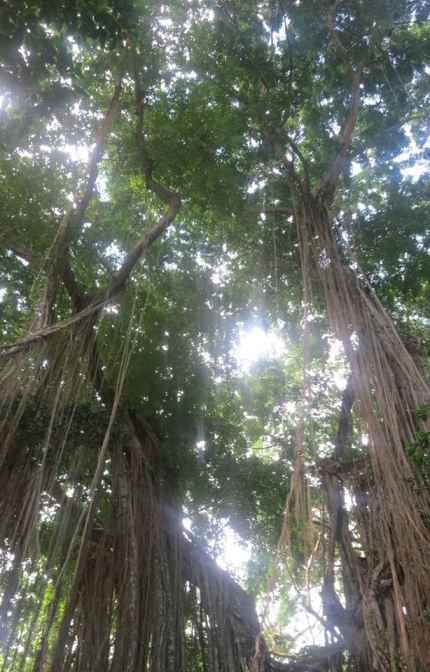 Monkeys aren’t the only species that populate this forest. There’s also an enclosure for Timorese rusa deer.

After an hour of wandering the sanctuary, it was finally time for lunch. One dish I’ve been wanting to try since before the trip is the babi guling, or Balinese roast suckling pig. I’m glad I saved those cravings for this afternoon. 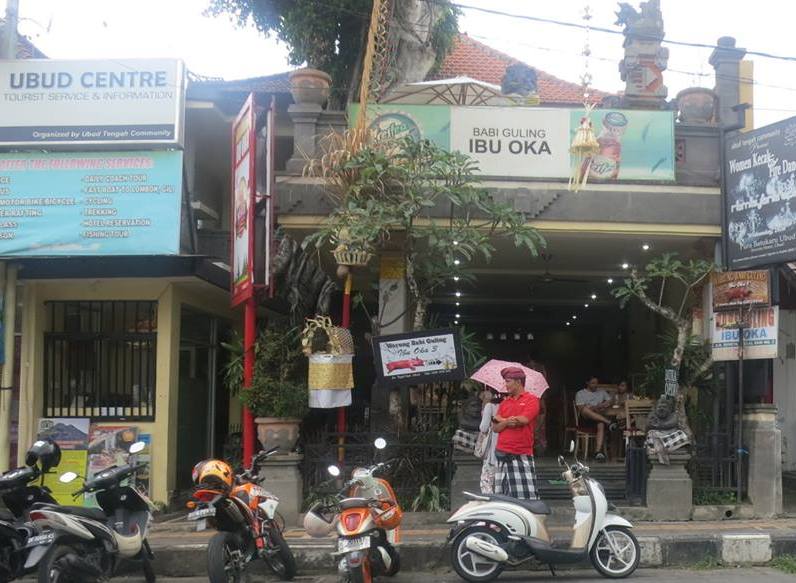 Ibu Oka Warung is reputed to serve the best babi guling, or as I’d like to put it, Balinese lechon. Located across Ubud Palace, this shanty cafe has become a favorite among wandering food lovers. At only Rp55,000/Php196, you can enjoy their babi guling rice toppings, served on a rattan plate with rice, gourds, fried intestines, and their special secret sauce. The crunch of the skin is just immaculate. It was probably the first time I shed happy tears after sampling a dish.

In an attempt to burn the calories, I continued exploring the palace and the adjacent market.

We left the village past 3:00pm. On the way back, Dewa brought me to Lumbung Sari, the home of Bali’s famous Luang (Civet) Coffee. The plantation houses a quaint outdoor cafe that faces a huge rice field. Upon entering you’ll be greeted by an unusual reception staff, which includes a luang, a caged porcupine, and a huge flying fox. Intimidating as the latter was, I’m grateful it was on siesta.

For the nth time in this trip, I was mistaken for a local. The attending farmhand particularly thought I’m from Jakarta. He listened with doe-eyed wonder when I revealed that I’m a foreigner. He had never left Bali in his life. After the short chitchat, he served me with free tea samplers, in addition to a cup of their infamous coffee. I’m glad to report that I did not experience any gastronomic repercussions. 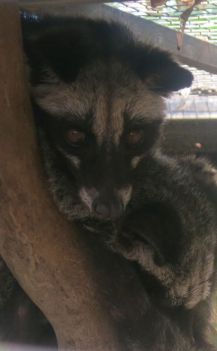 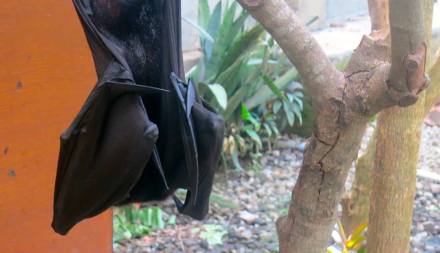 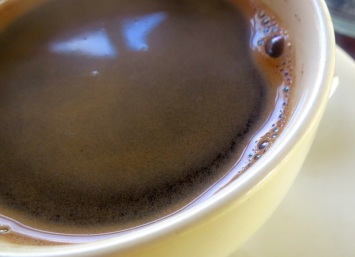 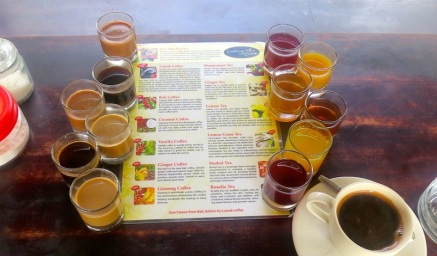 As if the babi guling binge wasn’t enough, I capped off today down south with seafood dinner in Menaga Cafe, Jimbaran:

FOOTNOTE: This was the first time I saw the pool empty during this trip. I ended the day with a quick dip and a Rp40,000 bottle of beer.