For the first time ever in a long-haul flight, I couldn’t sleep a wink. Back home, I was on the cusp of a major turning point, one that had been causing me weeks of anxiety. I was  bound for rattling change, regardless of which choice I made. Not knowing whether it would happen during or after the trip was the killer. The uncertainty got the best of me. But I resolved to keep my plight from my travel companion, Marga, even for just four hours.

I won’t expound on that ordeal anymore, but I’ll say this: Life’s too short for us to be constantly threatened with disapproval. If something limits or, worse, consumes us, then it’s time to search for other avenues. But thankfully, really, this maiden Korean voyage was what it took to get my “Seoul” back. Pun gleefully intended.

The bus transfer from Incheon International Airport to Seoul (10,000 KRW/$9.40/P468.81) took a little over an hour. It was only then when sleepiness prevailed. In a brief waking moment, however, I did witness our bus crossing the bridge over Han River, which flows from North Korea and cuts through the South. That was when it began sinking in: time to think less about what’s happening back home and more about the adventure that lies ahead.

By the time we reached Dongmyo Station, the sun had disappeared. We couldn’t tell if it was because of the sunset or the gloomy weather. Either way, the temperature was at freezing point. It wasn’t exactly a warm welcome, not in the literal sense, at least.

As we disembarked from Bus #6002, snowflakes descended on us like meteorological confetti. It was my first winter in over a decade and first ever for Marga. The nostalgia gave me some semblance of calm (and after all, isn’t “calm” part of this country’s nickname?). The cold pierced through my pleather jacket and into my spine. It sent me to debilitating shivers as we crossed the street.  Fortunately, our hostel wasn’t too far away.

Among its amenities are a laundry area on the second floor and a communal kitchen on the ground floor. There, guests can cook their own food using the provided equipment and enjoy unlimited bread and rice.

As for the rooms, the hostel offers six (6) types: Two single rooms, two twin rooms with two beds or bunks, double rooms with one large bed each, and a triple room with three beds each. Note that only select single rooms and twin rooms have private bathrooms. We chose the latter.

But part of its charm, really, is the warm and personable staff. Generally, hostel people are a departure from uniformed, well-polished, and highly-trained hotel personnel. Hostel Korea’s is no exception. Here, you see them with their hair untied in the morning, eating the same cereal from the pantry, and walking around with thermal socks exposed. They show no qualms in engaging their guests with just about any topic. You’ll really feel like a houseguest.

After an hour of freshening up, and in my case, attending to that ongoing matter back home, we decided to add two more layers to our attire. It was time to explore.

Just a 26-minute train ride from Sinseol-dong is one of Seoul’s iconic sites: the bustling and insomniac district of Myeong-dong. Much like Shibuya in Tokyo and Ximenting in Taipei, Myeong-dong is one of the city’s busiest retail hubs, where foodies and fashionistas converge and sensory overload is guaranteed. 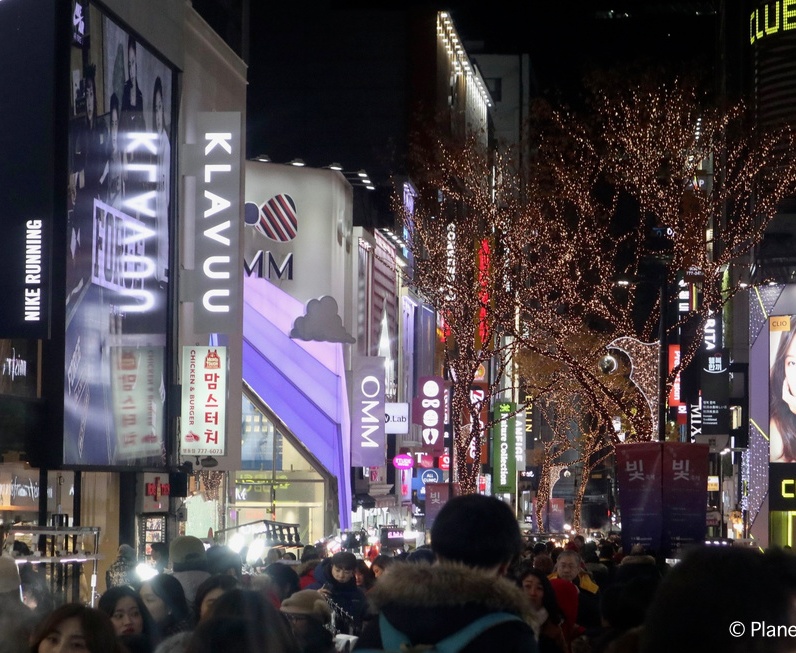 It’s easy to get lost in Myeong-dong’s electrifying frenzy of bright lights, loud music, and mouth-watering street fare. It’s exactly why we spent most of our nights here. And fittingly enough, it’s where we had our first meal:

Myeong-dong offers a cornucopia of peculiar street food. The first one we tried was the grilled octopus skewer. While it looks tough, this salt-and-butter-seasoned snack is surprisingly crisp and chewy.

And for our Day 1 main course, we each had a huge bowl of kalguksu (handmade noodle soup) and a platter of mandu (dumplings) to share at Myeongdong Kyoja, a noodle restaurant which has been around for 40 years.