The trip began on an anxious note. That much I established earlier. So, it’s a good thing that our second day fell on a Saturday. And with no one to inundate me over the phone that weekend, I actually did enjoy a Morning Calm (Don’t push it, Self). At that point, I resolved to look at the bright side of my ongoing murky situation and just take a breather: Just like that day’s destination, which endured a grim, shaky history before evolving into the visual spectacle that it is today.

Such is the peculiar case of Gwangmyeong Cave.

The diminutive city of Gwangmyeong is located in Gyeonggi, South Korea‘s north-westernmost and most populous province. While Seoul is geographically in this province, it is separately administered as the nation’s capital. It’s almost the same case as Incheon, which also bears its own jurisdiction despite, being situated along Gyeonggi’s coast. Together, the two mega-cities and the whole of Gyeonggi Province comprise the Sudogwon Region, or to put it loosely, South Korea’s NCR.

Gwangmyeong is located southwest of Seoul and it’s approximately an hour-long train ride from Sinseoldong, the station closest to our hostel. The first stop within the city is Cheolsan, from which we took Bus #17. 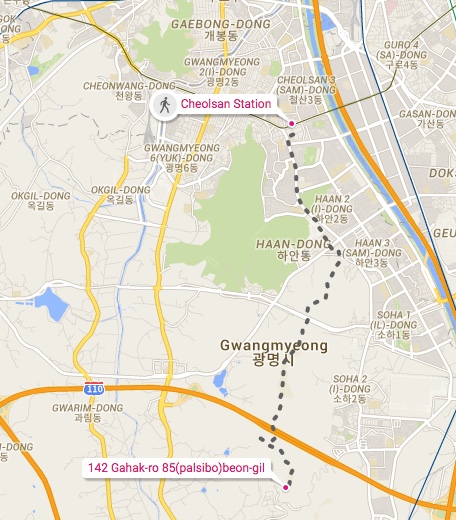 During the nearly hour-long bus ride, we caught a glimpse of the world’s largest IKEA store, which sprawls at 59,000 square meters and is connected to a Lotte Premium Outlet branch. From there, it didn’t take for us to reach the Gwangmyeong Cave Bus Station.

Save for a few patches of snow on the pavements, the vicinity appeared to be stuck in autumn. The leaves haven’t left the trees, though they’ve acquired the familiar shades of orange and golden brown. Seven (7) degrees centigrade was the warmest it got that day. It was still cold for us tropical islanders, but props to Mother Nature for not turning us into popsicles.

There are two ways to reach the cave’s main entrance. The first is through a series of steep staircases (left) that will take you through the trees occupying the slopes. The second (right) is a winding, more scenic path, which is what we assumed to be a jogger’s dream come true. Since we had to make it inside the cave before sundown, we chose the wheezier route.

Upon reaching the top, we panted our way towards the ticket booth. Along that path, streamers of a recently-concluded Barbie exhibition were still displayed (how peculiar how Mattel would choose to pay homage to its plastic muse in a cave). Not far from the booth, children mingled with the cave’s official mascots.

Rates are halved for Gwangmyeong City residents. Toddlers, senior citizens, and people with disabilities may enter for free. 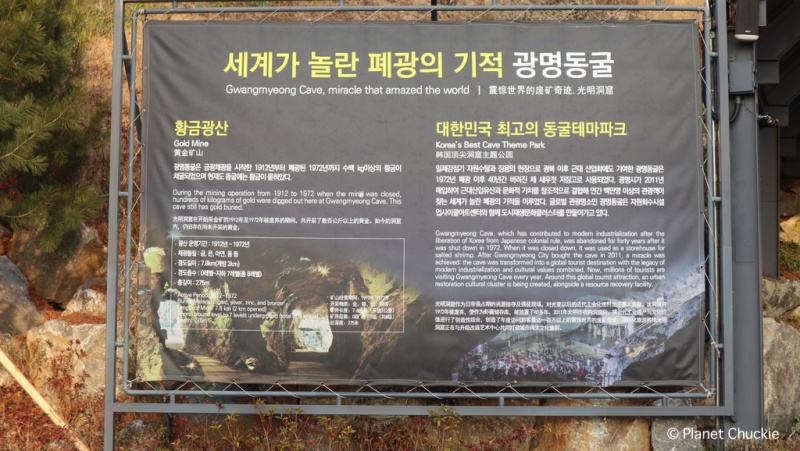 Not many cities can boast having a “Cave Theme Park” in its map, and that’s where Gwangmyeong takes pride. A billboard mounted by the entrance is headlined with the blurb “Miracle that Amazed the World”. Given the cave’s tumultuous history, that is by no means an exaggeration.

The 7.8-km cave was the backdrop to some of modern Korea’s darkest eras.  In 1912, hundreds of Korean miners were forced by Japanese colonizers to dig gold and silver. This went on for three decades, until Korea’s independence (and split) in 1945. Half a decade later, the cave became a shelter for refugees from the Korean War, which lasted until 1953.

From 1955 to 1972, the cave was again used as a mine, where 250 tons of ore were unearthed. Digging ceased when a heavy flood carried waste out of the confined areas and damaged surrounding towns. The mine was since abandoned and repurposed for salted shrimp storage in 1978.

It wasn’t until this decade when the cave resurfaced into collective memory. In 2011, the Gwangmyeong CIty government purchased and reinvented the cave into an arts and entertainment hub. This ignited a major surge in Gwangmyeong’s tourism – from roughly 3,000 tourists in 2010 to a record high of 1.54 million in early 2017.

Apart from the gold and silver still lining its walls, the cave now houses several unique attractions. How something that was once so tragic could transform into something so kitschy and whimsical is beyond us.

The entry tunnel is sporadically lit and paved with bricks. At first, it felt like a long walk to nowhere. As we moved farther in, it started to feel slightly warmer – ironic, since this is also where residents escape the summer heat. We walked until the passageways split into two.

The fork on the passageways double-functions as a foyer. That’s where it starts to get visually-stimulating.  The paths were lined with artificial flowers with neon pollen. At the center were sunflowers and autumn paraphernalia.

The Light Space is where the frontier begins and feels straight out of Avatar.  This tunnel leads to the depths of the cave. Its illumination is a sight to behold. 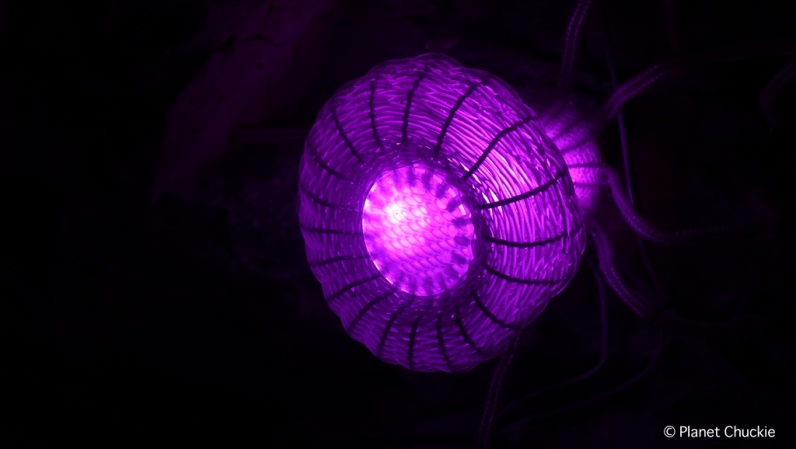 At the end of the tunnel, we were greeted by the Jellypets, or the Luminous Creatures of Gold Cave. These illuminated artistic representations of assorted animals, including jellyfish, cranes, and larvae hint at enigmatic creatures that could be lurking around. 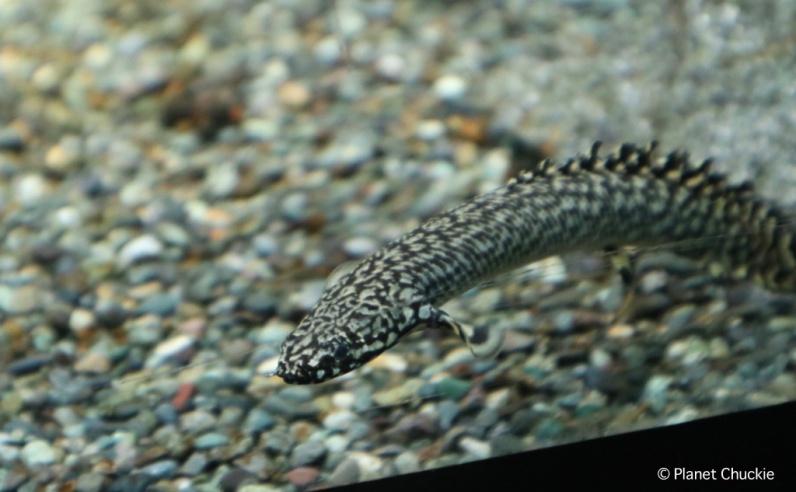 Just a quick walk away from the Light Space is Cave Aqua World. This unusual subterranean aquarium houses a variety of cave-dwelling species of fish, some of which have existed since the prehistoric era, including arowanas, piranhas, parrotfish, and gars. And in an obvious nod to Pixar, one tank houses clownfish and blue tangs. 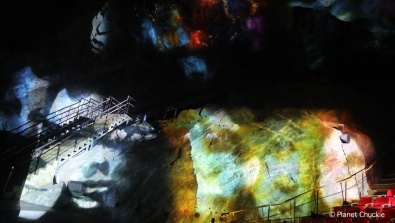 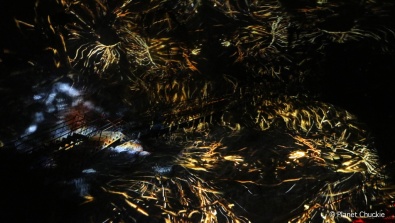 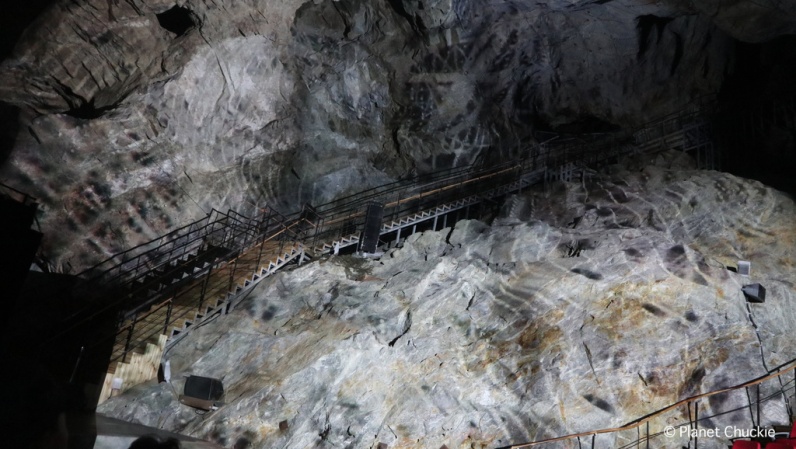 One of the largest open sections in the cave is the Cave Art Center, where the stunning Black Light Performance is held every weekend. The stunning light show takes place every 30 minutes and utilizes a combination of lights, lasers, and surreal imagery, set to an evocative musical score.

Further down is the Golden Road, where bulk of the gold-mining activities used to be held. Nowadays, it’s one of the most popular sections of the cave. Apart from the glistening motif, it is believed that actual gold can still be found within its walls. 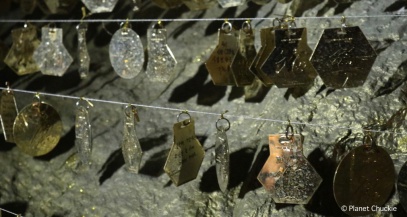 Other attractions along the Golden Road are the Golden Plaque Wishing Wall, where visitors can write their wishes on medals and mount them on the Wall of Hope…

…and the Golden Waterfall, a man-made waterfall which runs on natural springs.

We went deeper still (like we had a choice; we had to strictly follow the route). Located in one of the lowest sections of the cave is the Zombie Castle, part of Gwangmyeong’s Horror Experience. For 2,000 KRW (3,000 on weekends), guests can test their bravery by walking through a pitch-dark path replete with spooky sound effects. We opted to skip that one, but it’s interesting how they managed to mount such an attraction this deep down. 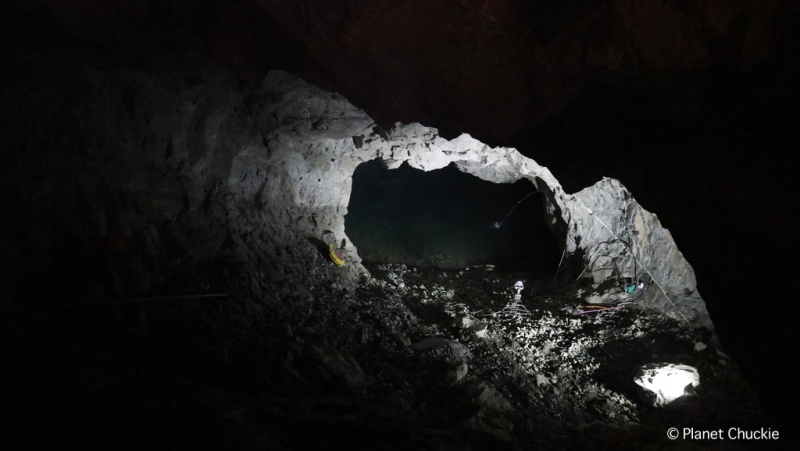 A quick chat with a local tour guide then revealed to us that an even deeper portion of the cave will soon be developed into another attraction. That area contains a vast underground lake filled with pure mountain spring water. The tour guide then noticed how perplexed we were by her sudden attentiveness. “Wait, aren’t you Thai?”, she asked. To which Marga laughed and responded: “We’re not. I think your group is still upstairs.” Not wanting to aggravate her slight embarrassment, we thanked her for the free tour. 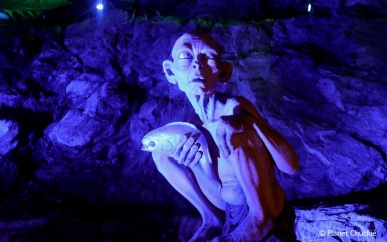 And then, an Easter Egg-of-sorts for Tolkien and Peter Jackson fans: statues of Gollum and Smaug the dragon, produced by Weta Workshop, are on underground display, along with other Lord of the Rings paraphernalia.

It was a steep and dizzying stair-climb back up. But before we knew it, we had reached the final attraction. The Wine Cave is another unique section of Gwangmyeong Cave, which offers over 170 locally-produced wines. In fact, it is the only South Korean winery with such vast variety. The area is further divided into the main cellar and the tasting room, where guests can either avail themselves of free samples or purchase a bottle or two. Also in that section is the Maru De Caves, a restaurant that offers an unorthodox fine-dining experience. 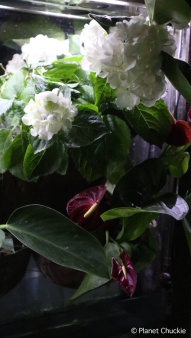 We walked past a hydraulic botanical garden as we headed out. The paths soon converged and we were back to the entry tunnel.

By the time we got out, the sun was making its exit. The mountain offers a spectacular view of the sunset with Gwangmyeong City as the backdrop.

Before making our descent, we caught another glimpse of the gargantuan Gwangmyeong Resource Recovery Facility. While it looks straight out of Candyland with its predominantly pink facade, it’s actually a waste treatment plant designed to reduce pollution in the area.

Temperatures soon dropped to 3 degrees centigrade, signaling that we had to head back. Going down, we took the more leisurely route for a better view of the scenery. It was a relaxing downhill stroll – what better way to conclude our day in Gwangmyeong.

It was past 7:00pm, when we made it back to the capital. We capped off that day with all-you-can-eat Samgyeopsal in Meat-ing, Myeongdong…

…and a stroll in Seoul’s hipster haven, Hongdae. 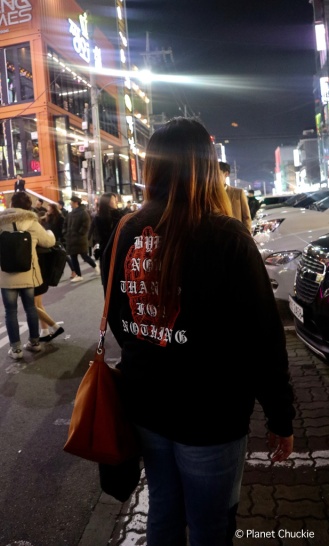